The Mark of a Champion Extremely Hot Chips

The Mark of a Champion Extremely Hot Chips 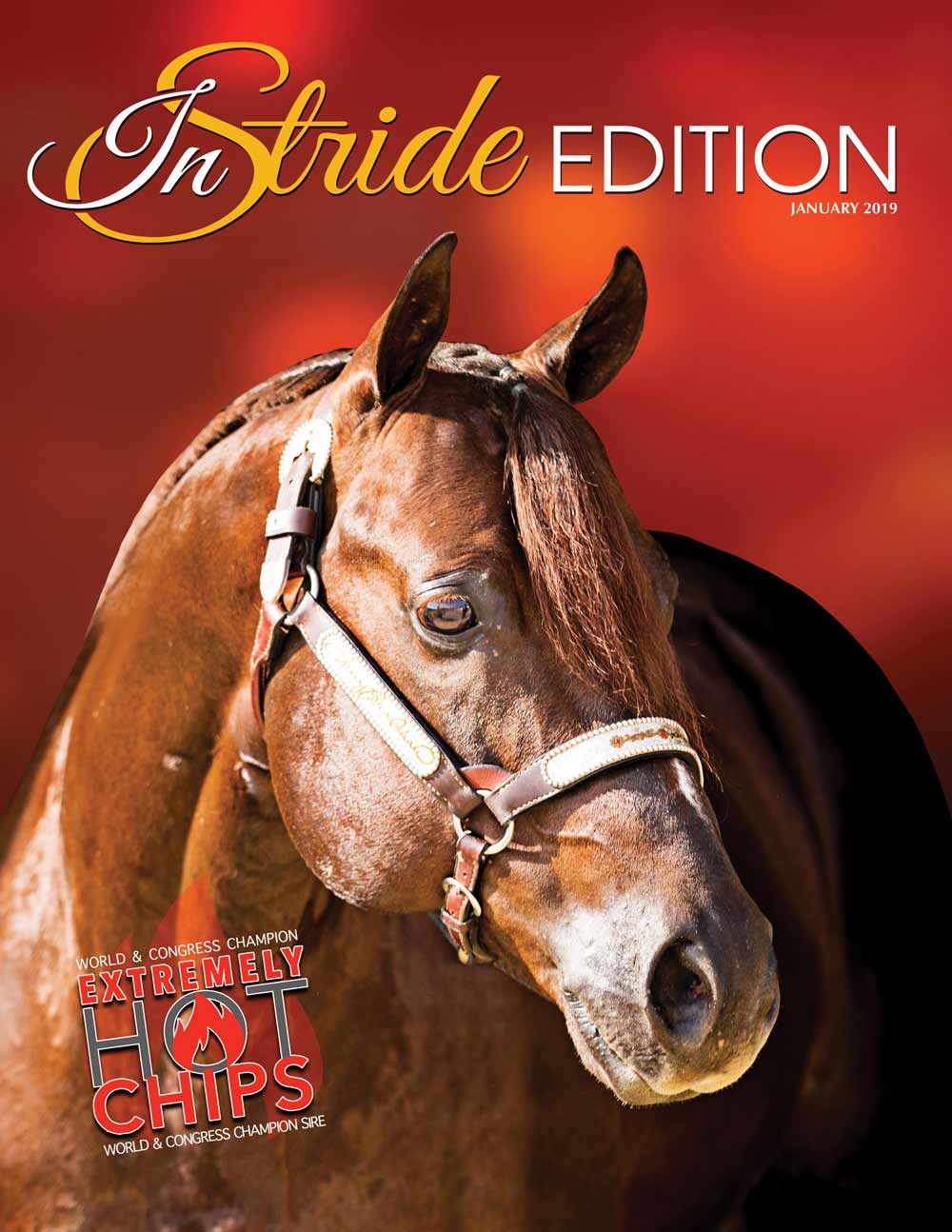 [/custom_frame_left]Tammy and Terry Bradshaw are determined to continue to promote the American Quarter Horse by breeding, raising, showing and selling outstanding stock. So, when the opportunity to purchase a stallion with as promising a future as Extremely Hot Chips arose back in September, the decision was easy.

“He is the leading money earning AQHA stallion of all time.” Terry Bradshaw said. “Chips has proven throughout his decade-long show career that he is a superb-moving pleasure horse with complete soundness, intelligence and heart. That has taken him to the top, year after year from the start of his show career in 2008 until his full retirement from the show pen to become a full-lime breeding horse after the 2017 AQHA World Show, where he was named Reserve Champion in Senior Western Pleasure (the oldest stallion to ever claim that title).”

All this was accomplished while Extremely Hot Chips was also being bred to a full book of mares.

And that is where the real magic was happening. For already, Extremely Hot Chips offspring have been AQHA, NSBA, APHA and ApHC World Champions, Quarter Horse Congress Champions and in 2016 he was the Western Pleasure Super Sire of the Year.

In 2016, Extremely Hot Chips was the sire of both the Open and Limited Division Congress Masters Western Pleasure Champions – Jay Starnes rode Extremely Late, out of Flashin My Assets, to a win in the open Division, collecting a check for $30,000 and Daddy Doesnt Know, out of RL Saved By Impulse, won the Limited Division with Brian Baker in the saddle for Caroline Cavallo. Extremely Late has a total of $47,716 in earnings to date.

Just a few of the other Extremely Hot Chips winning offspring include:

Extremely Good Stuff, a 2013 red roan gelding out of Shes Got Thegoodstuf, is the 2018 AQHA and NSBA World Champion in Junior Trail. Owned by Lauren Stanley and prepared and shown by Bruce Vickery, Extremely Good Stuff has recorded 552.5 AQHA points and $41,943 in earnings.

Extremely Dark Chips, a 2012 brown gelding out of Love It In The Dark, was the 2016 AQHA Reserve L2 Junior Western Pleasure World Champion and the 2016 NSBA BCF 4 to 6-Year-Old Open Western Pleasure Champion. To date, he has recorded $36,625 in total earnings.

Shesa Hot Selection, a 2012 chestnut mare out of Emerald Selection, is the 2018 AQHA World Champion in Amateur Equitation. To date she has recorded 460 AQHA points and $15,498 in earnings.

Extremely Hot Cowgirl, a 2015 ApHC mare out of Hunters Cowgirl and owned by Lisa Krueger was the 2018 ApHC World Champion in the 3-Ycar-Old Open Western Pleasure with Dustin Eickenhorst.

Joan Schroeder, owner of Kiowa Ranch in Collinsville, Texas, has served as the breeding manager for Extremely Hot Chips since 2016. ”His geneology is superior, which means he passes down all the good stuff, conformation that creates soundness; intelligence; and a good heart that supports willingness,” Schroeder said. “Like his sire, Extremely Hot Chips is kind, easy and full of personality.”

Schroeder, who is a longtime breeder of quality Quarter Horses, an AQHA director and supporter of AQHA, NSBA, the Western Pleasure Super Sires Program and a committee member of the AQHA Stud Book and Registration, said that what’s even more important is the fact that Extremely Hot Chips passes his good movement, soundness, attractiveness and natural athletic ability on to his foals, which enables them to learn quickly and excel in numerous events.

“Equally important to mare owners is the fact that Extremely Hot Chips has an exceptional conception rate, making him an even greater value,” she said.
Schroeder is thrilled to be working with Extremely Hot Chips’ new owners and said the Bradshaws share her commitment to sound business practices as they expand into the performance horse industry.

“Terry and Tammy Bradshaw are simply ‘good people’ and I am blessed to assist them in their endeavors in the performance horse world,” she said. “They are a definite positive for the breeding and showing horse industry.”

Schroeder said that Terry Bradshaw, a National Football League Hall of Famer and four-time Super Bowl winning quarterback for the Pittsburgh Steelers, rode horses all his life “until he was threatened by his managers that if he got on another horse they would break his knees.”

Terry’s love for horses began at an early age. “When I was a small boy, my grandfather had Clydesdales and my uncles had roping horses,” he recalled. “I would sit on the back of the Clydesdales while he (grandfather) plowed the field. I loved the smell of the horses as they worked.”

Terry got his start showing horses with a stallion named Casmir in 1999. But his work schedule at that point in his career left little time for him to enjoy it. About 10 years ago, he returned to competition and since then has claimed two AQHA World Championship titles in Halter, several PHBA World Championship titles and lots of weekend show wins.“Those are actually the most fun for us” he said.

In 2006 Terry moved his entire horse program to a 744acre ranch in Thackerville, Oklahoma.
Tammy always loved horses too – she grew up riding at her parents’ pastures in Missouri but never had the opportunity to show until she and Terry married in 2014. Since then she has claimed AQHA and PHBA World and Reserve World Championship titles in Amateur Halter competition.

Over the years, the population at the Thackerville ranch has grown to include a wide variety of inhabitants.
“We have 10 dogs that are very spoiled,” Terry explained, “and yes, they do all come in the house with us. We also have two cats, that think they are dogs, two Alpaca, three goats, 20 chickens, four miniature donkeys and lots of wild deer. There are three lakes on the property stocked with “monster bass, crappie and perch.”

The Bradshaws also raise pigs every six months or so and donate the pork to local food banks. And, they have a herd of Brahman cattle at the Gardiner Ranch in Kansas.

The horse facility consists of a 20-stall show barn, a mare barn and a four-stall stallion barn. In addition to Extremely Hot Chips, the Bradshaws own Halter stallions Telasecret, lnitials Only, lnfluentual, FG Phenomenal Fella and Major JD Parker.

But Extremely Hot Chips will continue to stay at Kiowa Ranch, in Collinsville. After thc sale of the Schroeder Ranch in 2015, Joan purchased 60 acres of rolling pastures, oak trees and a lake, just 12 miles south of Gainesville, her home since 1980. She kept 32 acres and sold the rest to her son, Ryan and his wife, Katie (Forrest) Schroeder for their business, Equiflight. On her 32 acres, Joan built a 14,000 square-foot barn housing 17 stalls, each 14 by 20-feet plus two larger stallion stalls (one of which will be Blazing Hot’s final home) and a full breeding lab.

“Extremely Hot Chips came to me for the 2016 breeding season so 2019 is my fourth year standing him and I am thrilled to have him,” Schroeder said.
Schroeder had a great working relationship with Extremely Hot Chips’ former owner, Russ Louderback and she said she is excited about his future with the Bradshaws.

“Tammy is really inspired to show Chip’s offspring in the riding events, as is Terry’s daughter Erin and her husband, Scott Weiss.”

Extremely Hot Chips’ 2019 stud fee has been set at $2,000 with discounts offered to return/loyalty customers, proven and multiple mares and considerations are extended to color breed mares. The chute fee is included in the breeding fee and there is a $400 same-day air fee for cooled shipped semen or $300 for Fed Ex.

For more information on Extremely Hot Chips visit his website at www.extremelyhotchips.com or like his Facebook page to stay up to date. For breeding information contact Joan Schroeder at (940) 727-3474 or email her by clicking here. You can also visit the Terry Bradshaw Quarter Horses website